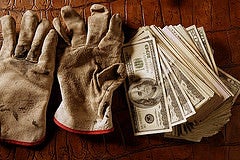 Expense fraud is bad, but it’s not the only way or even the worst way companies can get scammed. The annual Association of Certified Fraud Examiners report revealed nearly 50 percent of small businesses eventually fall prey to some type of fraud. Each instance averages $114,000, and is usually pulled off by a trusted employee.

One construction company’s payroll account and time-keeping system had never been reconciled, leaving the door open for a manager and two of his employees to put in for more than $80,000 worth of overtime for the year. Their time sheets showed they were working on two projects, 50 miles apart, at the same time.

The three were fired, but the money was history. While $80,000 seems hefty, it amounted to a mere 4 percent increase in the payroll cost. Balancing payroll records and balance sheets monthly, or at least quarterly, can catch discrepancies sooner rather than later.

One restaurant’s bookkeeper got away with $550,000 over a five-year period. Her M.O. was to write two checks every time she paid a bill: one went to the vendor; the other went in her pocket. The check written to herself would be attributed to the vendor in the books, making the fraud tough to catch. A fill-in bookkeeper eventually did catch it, underscoring the importance of regularly balancing the accounts payable books and having more than one person sign off on checks.

A part-time office manager became disgruntled. She was a single mom making $10 per hour, scheduled for just enough hours to keep her ineligible for health benefits. So she began ordering extra office supplies for the company, returning the unneeded supplies and pocketing the refunds over a three-year period. Fairly compensating good employees, who end up paying for themselves, can create the healthy work environment needed to deter this type of fraud.

One engineer hired his best friend’s daughter as the bookkeeper, eventually entrusting her as the sole person in charge of the books. She took this opportunity to pocket the money meant for payroll taxes, netting $439,000 over three years. The IRS seized the business accounts and the engineering firm went out of business. Creating a system where employees are always held accountable is a must, even if that employee is a friend.

Have any interesting workplace fraud you've seen? Tell us about it in the comments section.