While the 1990s may feel like a lifetime ago, the last decade of the 20th century continues to hold a special place in our hearts. How can we possibly forget the Macarena, dad shoes, mom jeans, Polaroid cameras, The Lion King, Friends, Beanie Babies, Tamagotchis, Furby or the dial-up modem jingle?

We’ll always be sentimental over the last decade of analog living before the internet took over our lives (and jobs).

But as much as we all love the ‘90s…they happened 30 years ago. Think about it: we went from iPods to smartphones since the turn of the century. Yet many of us continue to use legacy technology solutions from the ‘90s to this day.

This doesn’t make a whole lot of sense.

As times change, so too do our expectations. Businesses of all sizes increasingly rely on modern, cloud-based software-as-a-service (SaaS) solutions to streamline their workflows, simplify complex processes, and provide better products and services to their clients. 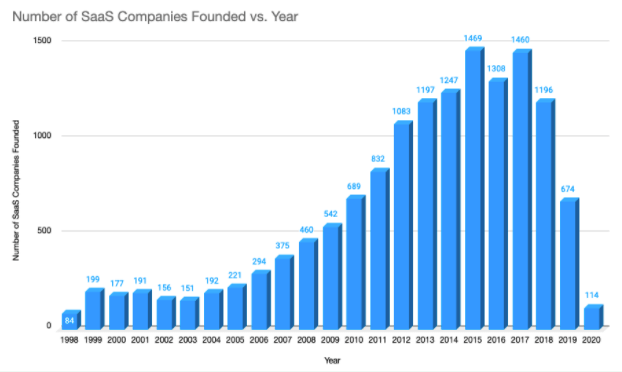 Aside from the dip leading up to 2020, the number of SaaS solutions just keeps growing. Source

Unfortunately, it can be very difficult for finance teams with million- or even billion-dollar budgets to upgrade their existing systems, no matter how outdated they are. Nobody spends hundreds of hours manually building spreadsheets, double-checking every cell and formula, or creating reports from scratch because they want to. They do it because it’s the only way they know how.

The “if it ain’t broke, don’t fix it” mentality of yesteryear will only get you so far when your processes might as well be broken because they’re so dated. In the 21st century, “tried-and-true” solutions won’t be enough to elevate your business if you’ve been using those same solutions for decades.

At the end of the day, outdated expense management and AP software from the ‘90s wastes more time and money than it saves. Using the most up-to-date platforms and solutions is the only way to ensure your company stays competitive in this fast-paced, mobile-first digital era.

According to Kaspersky, the costs of running outdated software can be really high. How high, you ask?

Well, large corporations spend an additional 51 percent on repairing outdated networks and plugging data breaches when compared to companies that regularly update their tech stacks. This works out to $389,000 wasted annually—across the board.

Even worse, the US federal government allocated over $90 billion to IT alone in 2019. (Yeah, you read that right.) About 80% of that budget (or $72 billion) is wasted operating and maintaining existing legacy software and costly, older hardware systems.

You don’t have to be an accountant to know that those numbers are out of control. 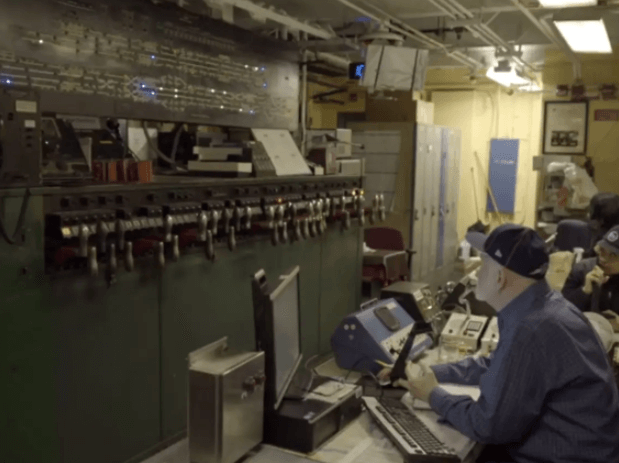 No wonder New York City metro workers get all that overtime! Source

Even worse, the crippling maintenance and support costs tied up with legacy solutions continue to grow every single year because these platforms become crutches and can cripple your business.

This is what techies like to call “tech debt.” The older and more bloated a tech or software solution is, the harder it will be to catch up to modern alternatives. And as with actual, financial debt, tech debt carries an interest—the longer you ignore your tech debt, the more you’ll owe when you finally decide to pay it down.

In other words, given enough time, the gap between forward-thinking, tech-friendly companies and slow-to-catch-up corporations widens into a gaping maw—one that’s simply too expensive to ever bridge.

Unfortunately, CIOs know that tech debt is increasing, but most organizations allocate less than 20% of their budget to pay it down and catch up to the competition (probably because they know that paying it all down is impossible). Remember when Beanie Babies were collectibles?

It’s okay, we know what happened. Because it happened to us, too. As much as we loved our Beanie Babies, they all ended up in dusty suitcases, became hand-me-downs for our kids, or turned into chew toys for our dogs. 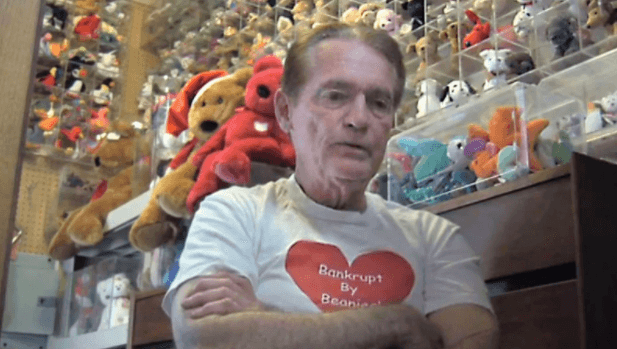 “You mean to tell me my Beanie Babies aren’t worth the $100k I spent on them?” Source

Coincidentally, one of the biggest blind spots for large companies is human error. And the potential for human error that will always exist at any organization—especially really large organizations.

If that’s the case, why do we keep relying on risky legacy solutions? Corporations have entire teams that literally do nothing except analyze and manage risk, yet they leave themselves vulnerable to easily preventable human errors and can cost their company millions or even billions.

As an example, a Citigroup employee made a single clerical error that cost the bank nearly $1 billion in 2020. The unlucky guy accidentally sent Revlon Inc. lenders $900 million—100 times more than what they were due to receive—and the lenders refused to give it back. Unsurprisingly, Citigroup is now embroiled in a lawsuit with Revlon.

Here’s the thing: these nightmare-scenario input errors happen far more often than most people think. Fortune 500 companies regularly show up in the news for million- and even billion-dollar mistakes that can be traced back to simple, everyday human errors.

The most common types of human error that could lead to costly mistakes include:

It’s important to point out that even when human errors are caught, they still take plenty of time and human resources to fix. So, whenever any human error is made, it carries a cost. And at the enterprise level, those costs can add up to stupendous, stomach-churning numbers.

Of course, switching over to a new tech platform or stack—especially at the enterprise or corporate level—is a lot easier said than done. Getting buy-in from decision-makers is often a long-term struggle.

Listen, we get it. When you’ve been doing things the same way for a long time and it made you a lot of money, it’s easy to get stuck between a rock and a hard place. It becomes surprisingly easy to dislike change and deny that change is even necessary.

Have you ever tried convincing decision-makers who still rely on legacy solutions they need to overhaul their tech stack when it’s still ‘working’? You might as well ask them to eat humble pie.

That’s why reaching consensus is a lot easier when everyone understands the costs of not upgrading your tech stack: potentially fatal security breaches. According to a Meritalk survey, 92% of federal IT managers in the US think that security breaches, performance issues, and service disruptions are serious threats “if legacy applications aren’t modernized in a timely manner.”

This isn’t too surprising. After all, most well-known legacy solutions were developed decades ago. At the time they were built, they featured best-in-class security features. But scammers and hackers innovate faster than cybersecurity solutions can keep up. 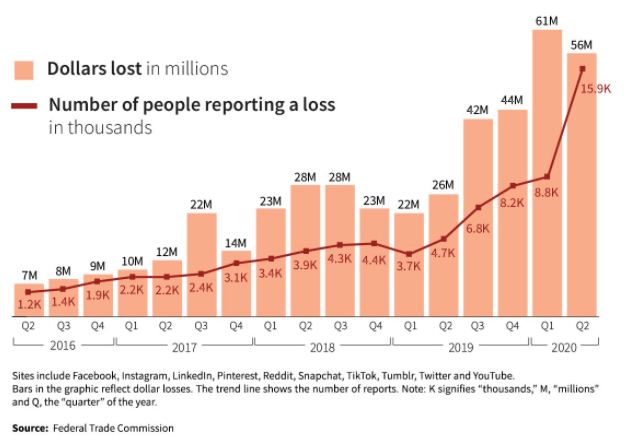 Cybersecurity solutions also carry tech debt. So whenever a company with a multi-million or billion-dollar budget relies on outdated, legacy tech stacks to manage all their payments, there’s a very high chance it could eventually be compromised. Some would say it’s not a matter of “if” it could happen, but “when.”

Like many ‘90s fads, some things should stay in the past

One example of a legacy tech platform that many enterprise-level companies still rely on today is SAP Concur. Although it’s been around since the ‘90s, it clearly didn't get the memo.

Sure, Concur is technically a cloud-based SaaS solution. But the road it’s taken to get to that point was long, winding, and torturous. Think about it—30 years ago, Concur was a state-of-the-art, bleeding-edge “on premise” solution. Today, Concur is the most expensive, most bloated, and most user-unfriendly solution in the expense management space.

How is this possible if Concur bills itself as a modern, cloud-based expense management solution? Simple: Concur was built for a world that no longer exists—a pre-pandemic business environment where everyone worked in the office and technology was far less flexible, adaptable, and responsive. Back then, manual spreadsheet inputs, in-person presentations, and email attachments were the norm.

But user expectations were much lower back then compared to today.

With millions of lines of disjointed, siloed code and sloth-like software updates, Concur has far more tech debt than it can ever pay down at this point. Clunky and unintuitive, it doesn’t provide the degree of flexibility most users—especially the newer generation of finance, expense management, and AP teams—expect and rely on.

It’s sort of like a Tamagotchi or a Furby. It was fun and cutting-edge at first, but there are far better toys on the market today.

The modern workforce wants seamless efficiency, responsiveness, and customization, like the ability to manage expenses and reports in real-time, all from one easy-to-use dashboard.

Of course, if you don’t look around for alternatives, you’ll never know what you’re missing. 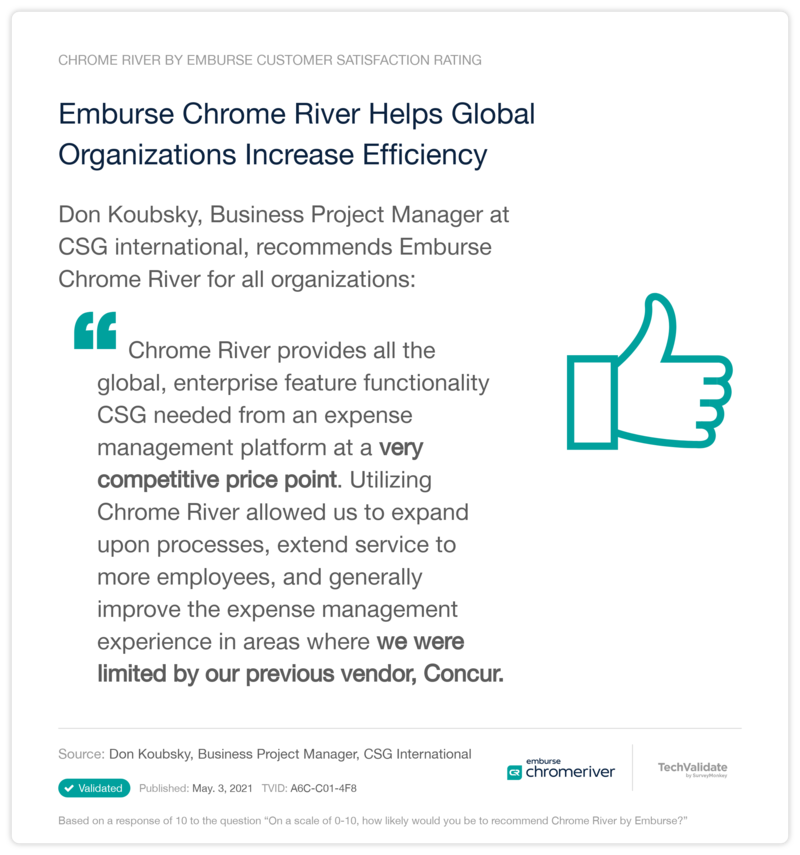 Say goodbye to the 90s and leap into the future!

You don’t buy Beanie Babies, feed Tamagotchis, or listen to playlists on your iPod anymore. So why should you still rely on dated technology from three decades ago?

Wouldn’t it be great if you had a seamlessly integrated, fully supported suite of customizable tools that eliminate the need for third-party add-ons?

How about a consistent user experience across all devices, from desktops to smartphones, so that your AP team can manage expenses, in real-time, anywhere in the world?

Finally, wouldn’t you prefer to pay per user rather than get charged for each report you generate?

The good news is that a solution like the one we’re describing exists already. But you don’t have to take us at our word.

Over 100 former Concur clients have switched over to Emburse Chrome River and experienced the benefits for themselves. In fact, 88% of clients who made the switch saw a return on investment within 12 months. Many enjoyed 99.9% system uptime for the first time, while others reported cost savings of at least 30%.

Don’t stay stuck in the ‘90s. Move forward with the ever-evolving business world and give your company the edge it needs to stay competitive well into the 21st century.