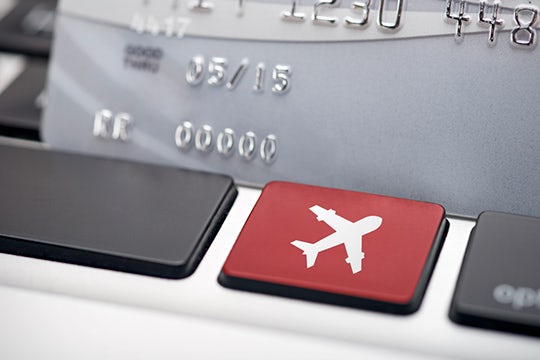 Although you may not see an online “Pay by Bitcoin” button as a choice when booking your next flight, a number of airlines will have the option of accepting the digital currency from travelers. The Economist reports the Universal Air Travel Plan, an airline payment network commonly known as UATP, has joined the Bitcoin processing platform of Bitnet.

UATP, in turn, is offering the Bitcoin option to its partners, which includes Delta Air Lines, Southwest Airlines, British Airways and more than 250 others that constitute the world’s biggest carriers.

Traditional means of online payments rely on the use of credit or debit cards, bank transfers or online payment systems such as PayPal, which can be slow, costly and susceptible to fraud. Bitcoin addresses those concerns by using digital currency in the form of computer code, which can be sent directly from the buyer to the seller without the need for a middleman.

Bitcoin transactions involve advanced cryptography and secret codes to ensure all transactions are highly secure. While bitcoin has been an available online transaction option for the past six years, it remains far from mainstream.

Those who are hesitant about the concept may welcome input from the US Department of Justice and former Federal Reserve Chairman Ben Bernanke. Bernanke says digital currencies can provide “legitimate financial services.” The latter notes Bitcoin may be a long-term, promising option that is faster, more efficient and more secure than traditional payment systems.

One of the biggest benefits, particularly for airlines, is the lower transaction fees. Even in thriving times, the airline industry typically rakes in an average global profit margin of 1 to 2 percent.

Bitcoin can also make foreign currency transactions easier and even be used in cases where people don’t have bank accounts. In Africa and other regions, people are already using mobile-phone-based payment systems for booking flights. Switching to Bitcoin would be an upgrade to their existing payment systems.

Bitnet and other e-commerce platforms are able to quickly convert bitcoins into actual currency, making bitcoins ideal for short-term use in digital transactions. Once the transaction is complete, the bitcoins can be converted into a monetary value in the desired currency. Latvia’s Air Baltic is now accepting Bitcoin, but none of the larger airlines have yet gone public with the move.

Keep tabs on your own travel expenses, Bitcoin or otherwise, with Chrome River’s expense report software.