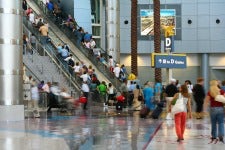 European business travel is primed to experience its greatest increase in the past half-decade, according to a Global Business Travel Association study, and its rise is bolstering economic hopes for Europe right along with it. The GBTA study forecast an increase in European business-traveling spending of more than 6 percent for both 2015 and 2016, boosting the annual travel-related revenue even higher than its most recent peak in 2009.

European business travel revenue hit $172 billion in 2009, a notable amount even with the global financial crises. The outlook for 2016 puts spending for Germany, the U.K., France, Italy and Spain in the ballpark of $211 billion, accounting for 70 percent of the overall travel-related spending throughout all of Western Europe.

The past six years has seen an average increase in European travel spending of about 2.4 percent per year, significantly lower than the annual 6 percent predicted for this year and the next. GBTA regional vice president Catherin McGavock told Reuters the European economy is on the upswing and finally starting to put its past economic pains “in the rear-view mirror.”

A region’s business travel and its economic health have long gone hand in hand. Companies tend to increase their travel spending when their economic outlook is optimistic. Likewise, they cut back on hotel reservations and flights when the outlook appears dim. The 2008 financial crisis resulted in a deep dip in U.K. business travel, which fell nearly 9 percent as organizations struggled to keep expenses under tight control.

The positive forecast for European business comes at a time when the overall global economy has hit a less positive note. While the International Monetary Fund initially forecast 2016 global economic growth to weigh in at 3.3 percent, it recently cut its prediction to 3.1 percent. The decrease can be linked to declines in production and demand in emerging markets spanning from China to Brazil. Reduced demand has had a particularly heavy impact on global shipping conglomerate Maersk, which saw its earnings plunge more than 60 percent in the third quarter.

Export giant Germany is poised to see the largest increase in travel spending, with a predicted 9.5 increase in 2016. The increase remains expected despite a predicted drop in shipments to China, where economic woes have been par for the course over the past several quarters. Not all European nations can expect the same type of growth spurt as Germany, with sluggish economic growth continuing as the trend for France and Italy. France’s travel spend is expected to increase 3.4 percent in 2016, with Italy gaining only 1.9 percent.

Keep tabs on your travel expenses with the best expense management software.