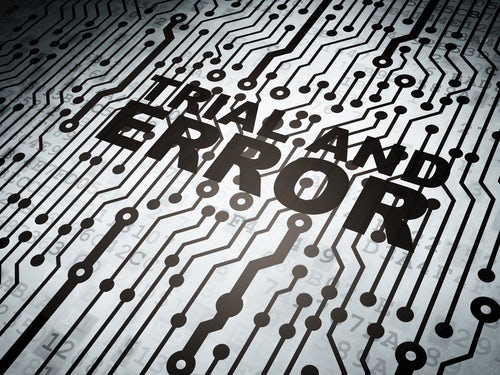 With more than 65,000 travel apps and 32,000 finance apps available through major online app shops, there is no doubt technology is exploding in the finance and travel industries. There is also no doubt that use of new technologies will inevitably lead to a bit of trial and error. To truly land on technology that works, companies may need to experience a few duds until they land on a keeper.

A case in point came from Airplus chairman Patrick Diemer while speaking as part of a CEO panel at the GBTA conference in Frankfurt. Diemer said his own company was in the trial-and-error phase of a restaurant payment tool that was currently under a pilot trial.

The tool is a mobile app that lets consumers order from a restaurant menu and then pay the bill without any type of currency changing hands. Payments are automatically routed into a digital expense management app.

Diemer said he had no idea if the app was going to serve as a feasible solution. And if it didn’t, he said they’d need to drop the ball quickly to pick up something else.

APIs on the Rise

Other industry insights came from panelist Alan Rich, CEO of Chrome River. He predicted an increased investment in application program interfaces, or APIs, to allow low-cost communication and data flow into the supply chain.

Rich also pointed to an increase in electronic validation of expense receipts, automatic receipt handling, as well as formal pre-trip approvals. The trends were expected to stem from employers placing less value and printed receipts, which can be altered using Photoshop or other image editing software.

The topic of sharing economy providers entered the discussion, with Diemer comparing them to low-cost airlines that previously catered to consumers only before working with corporate clients. He noted Uber, Airbnb and others would only be able to engage with corporate-managed travel programs if they adhered to the existing rules. Diemer added he was optimistic that the situation would “sort itself out.”

Chrome River’s Rich said buyers should always negotiate upfront in the supplier agreements to iron out details concerning the availability and delivery of data. Another point he touched on was the shortage of business analysts to review the ever-growing body of data that was being produced by the technology explosion.

No matter how much valid data may be generated, Rich noted, “The information is useless if no one has time to sift through it.”