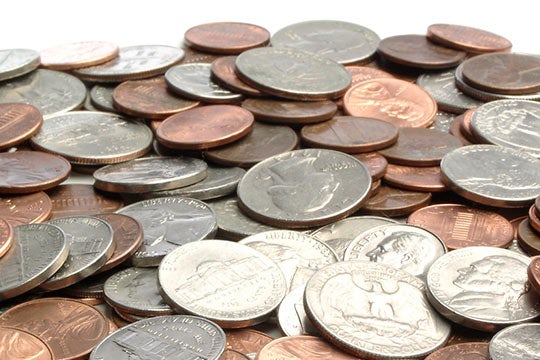 In the mad dash to restock their pockets after the airport security screening process, it’s not uncommon for folks to leave a few things behind. When those few things happen to be spare coins, it can add up to a lot of cash. Make that $674,841.06 worth of cash, which is the amount travelers left behind in US airports in the most recent fiscal year, according to numbers released by the Transportation Security Administration (TSA).

The latest cache of spare change is about $37,000 more than travelers left behind the previous year, when the total hit $638,142.64. So what happens to all that cash?

Where Spare Change Ends Up

TSA press secretary Ross Feinstein told Slate that all efforts are made to reunite passengers with any items they may have left at the checkpoint, but there are times when items remain unclaimed. When those items are spare coins, they get tallied up and turned over to the TSA financial office. So yes, the TSA gets the spare change windfall, provided no one has come forward to claim their wayward nickels and dimes.

Spare Change Left Behind by the Year

Based on the growing mass of change left behind at airports, the TSA makes a pretty penny year after year. With the exception of the slight dip in 2010, the amount of spare change people leave behind is on a steady climb.

As per Congress, TSA has had the authority to use the unclaimed cash for security operations since 2005. The TSA says this year’s haul is slated to go toward broadening the TSA Pre-Check program, which lets travelers move more rapidly through the security screening process.

Spare Change Left Behind by the Airport

As you may guess, the busiest airports end up with the greatest amounts of spare change.

TSA’s official definition of unclaimed change is money passengers unintentionally leave behind at airport screening checkpoints. And seeing how it can really add up may help you remember to do a double take when it comes time to restock your pockets.

Keep tabs on your own spare change. And, keep tabs on how your company’s travel expenses add up with Chrome River's expense report software.