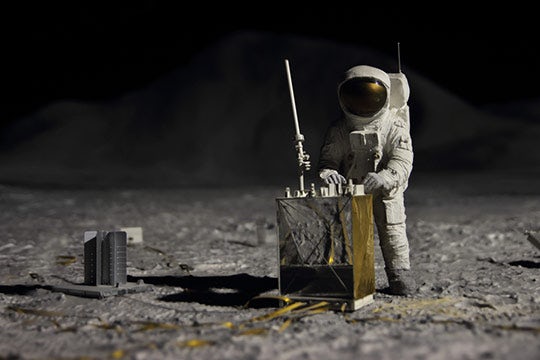 A 1969 trip to the moon and back is nothing like the average business trip these days, especially when it comes to cost. That’s because astronaut Buzz Aldrin’s total travel expense report for the lunar mission was $33.31 – only a shade higher than many airlines’ current fees for checking your luggage. The lunar mission’s cost and other fun facts were recently tweeted by Aldrin in honor of the 46th anniversary of the July 20th mission.

Even if you factor in inflation, the moon’s $33.31 travel expense would come to about $217 today. As noted by CNN, the expenses were so cheap because they only appeared to account for Aldrin’s transportation while on the ground, which boiled down to his use of a private vehicle.

His other expenses throughout the mission were covered. They included:

A few other factual tidbits show that moon travel has at least one thing in common with current-day business trips outside of the country. Aldrin and crew members Neil Armstrong and Michael Collins had to fill out customs forms upon their return, apparently protocol for travel outside the planet.  Moon rock and moon dust samples had been declared as their cargo.

Other paperwork shared by Aldrin gave everyone a thumb’s up in the health department, with no known illnesses affecting the crew other than the perhaps expected airsickness and “the effects of accidents.” Despite the apparent clean bill of health, crew members were kept in quarantine for three weeks upon their return to Earth.

The quarantine period was to ensure the astronauts did not unwittingly bring back any condition that could result in the spread of disease. It also involved crew members donning “biological isolation garments” before entering the quarantine chamber, an area outfitted with a TV, reading materials, ping pong table, exercise room and a telephone.

The isolation garments were meant to contain the moon dust brought back by the astronauts, since the effects of such dust were unknown. While great pains were taken to protect people on earth from the dust, however, Aldrin tweeted that the rags used wipe off the moon dust were disposed of in the ocean, subjecting the “poor underwater creatures” to the potentially risky moon dust instead.

Even if you don’t have to track travel to the moon, you do need to track business travel expenses. Make it easy with Chrome River’s expense management software.