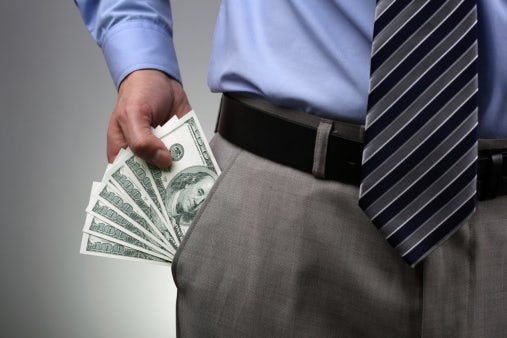 Bribery and fraud are not words you want associated with your company, but avoiding them may not be as straightforward as you think. Corruption doesn’t always come barreling in like a freight train. It can slither in like a snake, striking when you least expect it and are least prepared to handle it. A recent piece in McKinsey Quarterly examines the most common types of corruption companies can face in the global marketplace along with actions they can take to keep it at bay.

As companies are expanding into new markets across the world, the risks of falling prey to bribery and corruption are increasing. This especially holds true if the expansion is taking place in regions known for being corrupt. The risk of companies being held accountable for falling prey is likewise increasing, thanks to actions several countries are taking to fight back.

Corporations are increasingly being held liable not just for the behavior of their workers, but also the behaviors of their agents, consultants, partners and others associated with their business.

It’s not necessarily the obvious and headline-making corruption that is most dangerous, the McKinsey article says. It’s the subtle and sneaky forms of corruption, the “quiet killers of ethical business practices,” that can pose even greater hazards. The article outlines four main categories of corruption: bribes, speed money, extortion and employee fraud.

Bribery occurs when managers are paying out funds to gain some type of favor, such as winning a contract, reducing taxes or gaining regulatory approval for products. Bribery is outlawed by local laws in the countries where businesses are operating as well as laws in their home country. These laws ban company managers from exchanging something of value for a favor that can better their business.

While obvious bribery can be, well, obvious, creative practices exist to get around the obvious. Mangers may use dealers or agents to make payments, siphon money from slush funds or “pay” officials with costly trips, gifts or charitable donations to favored organizations.

Keeping bribery out of your corporation is best done by establishing a stalwart reputation as a company with strong ethics. Companies can, indeed, do business in any area of the world without succumbing to bribery. Make sure your own firm becomes one of them.

In some cases speed money can be inevitable, or even lawful. If you find your corporation faced with an obligatory speed money payment, make sure it’s cleared by your global headquarters and legal team. Also make sure the entire transaction is well-documented, with nothing done under the table.

Extortion occurs when crooked bureaucrats or politicians try to get money from a corporation by making threats against the business or the lives of corporate executives. While inexperienced firms may quickly pay up to ensure safety, that may not always be the only course of action.

Threats should be passed by your global CEO, legal team and advisory board to gather input on the right steps to take. The McKinsey article points out extortionists are typically “solo rogue actors” with no backing. Calling their bluff may work in some cases to eliminate the threat, as well as strengthen your firm’s reputation as an ethical, no-nonsense establishment.

Employee fraud is on the rise, sometimes posing a bigger threat to the corporation than speed money or bribes. And it’s often the senior executives you need to watch. Execs may feel pressured to improve the company’s financial performance, which can often be done by cooking the books, making shady side deals or stuffing the channel with inventory.

Greed is another main cause behind employee fraud, resulting in kickbacks, unauthorized commissions and deposits in overseas bank accounts. Thoroughly check references before you hire. Create an environment where people feel fairly compensated.

The ideal way to avoid all forms of corruption is to build a strong, ethical company culture. And the McKinsey article offers four strategies for doing so.

Start with the basics: A few basic controls need to be in place. Pay strict attention to compliance in every country in which you operate. Take punitive action against employee fraud, and ensure all workers know what that action will be. Institute a formal code of conduct, mandatory compliance training, and firm rules regarding travel and expense reimbursement. Then regularly review and enforce those regulations.

Establish a strong finance and administration team: Investing in key players is a must, especially in foreign countries with unfamiliar laws and compliance regulations. Make sure your finance, internal audit and legal bases are covered wherever you operate.

Lead by example: Your leaders are your role models, and they always need to model ethical, compliant behaviors. Zero tolerance needs to be your creed, and it needs to apply to everything. Yes, this includes personal phone calls, personal use of company property and travel and expense reimbursement.

Stick to your principles, no matter what: Building an ethical culture is not easy, especially when it can appear at times to work against your business. Approvals could take longer, officials may get miffed and you may miss a few budgets or deadlines. Such short-term losses, however, can ultimately lead to long-term gains if you stick with ethical behaviors, no matter what.

The McKinsey article quotes an IT business leader in India who sums it up succinctly, “We will do what is right, not what is convenient.”

Doing what is right in every country and every instance can take a lot of work, patience and preparation. But it’s also the surefire way to establish your company as an ethical, upstanding entity – both inside and out.